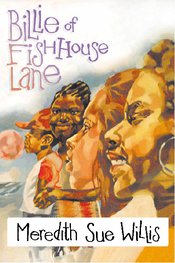 Smart, sassy, and eleven years old, Billie Lee lives with her eccentric family in a home on Fish House Lane. Her dad is an African American artist who carves tree trunks into sculptures; her mom, who's white, sews African-style robes that she sells at the Boutique Afrique. Billie loves her parents, her two younger brothers, and her know-it-all best friend, Eutreece, and she feels completely at home in her swampy neighborhood under an elevated highway in New Jersey. Then Billie's white cousin, Celia, shows up and changes everything. A sleepover at Celia's fancy suburban home releases a flood of questions. How can Billie be Black but also White? How can she convince Eutreece that Billie hasn't betrayed their friendship? And, when these kids get thrown together at Fish House Lane's summer barbecue, how can Billie and her friends accept one another long enough to solve the mystery of a neighbor named Neighbor, who has hidden something strange—and maybe dangerous—down by the canal? The answers to these questions challenge Billie far more than she ever thought possible.

Thoughtful books are not always entertaining, and entertaining books are not always thoughtful, but this book merges both into a joyful look at family, friendship, and race. . . . What an interesting way to frame [these issues]—placing the essence of racial conflict inside a single character allows Willis to explore these questions in a nuanced, non-pedantic way. Billy's voice is as fresh and interesting as her story. Children of all races will find both humor and understanding—as well as plenty to ponder—in Billy's open, enthusiastic approach to life. This book would be an excellent choice for book clubs and classroom discussions.

Biracial Billie Lee leads a harmonious life in a funky New Jersey neighborhood until her white cousin comes to town. There’s that, and a mysterious neighbor [who] alerts her inner detective. Billie Lee’s an appealing problem solver.

Billie of Fish House Lane transcends the genre altogether, bringing to mind great books about children for adults such as This Boy's Life by Tobias Wolf and Jamaica Kincaid's Annie John. Recommended.

Adam Sexton — author of Master Class in Fiction Writing: Techniques from Austen, Hemingway, and Other Greats

Billie of Fish House Lane has been added to your shopping cart.