Books » Fiction for Adults » The City Built of Starships 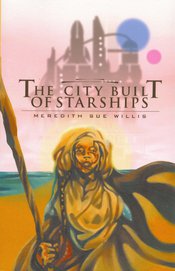 The City Built of Starships by Meredith Sue Willis

By the time the colonists landed on the planet with two suns, they had already divided into the rulers and the ruled. When the new world failed to provide sufficient food, this division erupted into a civil war. Some people fled to the desert; others stayed on the coast and built a city from the hulks of the starships. Now Espera—one of the desert-dwellers—learns from her wise mother how to make native plants edible and how to train the great flying beasts called yaegers. But when the young woman’s father arrives, asking her to undertake a dangerous quest, Espera overrules her mother and sets off to learn the secrets of the great City Built of Starships.

As long as Espera could remember, her father had come across the desert once during each moderate season to the cavern where she lived with her mother and the yaegers. During the harsh seasons, no one came. Then the wind blew the powdery stone sand into tiny razors, and there were week-long storms when the stone-sand mixed with ice needles. In those seasons, everything in the desert goes underground– things that are fixed, things that creep, and things that fly. It was in one of the great catacombs of the flying yaegers that Espera and her mother Soledad lived.

Espera much preferred the moderate season, when both the blue and the rose suns were in the sky together for a long lavender day. At that time of year, she and her mother could go out in the open and collect lichen and spores and the small radiant creatures they called glowworm. All these were second world natives that thrived in the crevices in the great rock fissures that split the desert land. The only first world creatures they knew were occasional human creatures like themselves.

When they went out foraging, the great yaegers would follow them, and they would share their handfuls of glowworm, which Soledad and Espera needed for heat and light, but which the yaegers appeared to use for pleasure; they bathed their great single eyes in Soledad and Espera’s handfuls of radiant worms.

Once when she was small, Espera asked, “Why can't they find their own glowworm?”

And her mother said, “They can. They do. But it's so much easier for us with our little fingers that are like the worms themselves. This is our way of thanking and honoring the yaegers. We are guests in their world, Espera. This is an act of gratitude to them.&rdquo

In the moderate season Espera and her mother also collected the first world people who came out into the desert searching for glowworm. Some of these were poor hands from the City Built of Starships who had fled their life under the officers. Some came to the desert looking for glowworm, which was highly valued in the City. The first world people were not nourished by second world food, but they had quickly discovered that certain second world substances altered their moods and gave them beautiful dreams.

Espera and her mother collected the bodies of these lost gatherers, keeping alive the ones that they could. Saving human travelers suited Espera's youth and temperament far better than the quiet meditation that filled her mother’s days. Espera could scan the horizon for hours, hoping to see human travelers in trouble. It was their duty, taught Espera's mother, to succor the exhausted, heal the wounded, make comfortable the dying, and honor the yaegers and other second world people.

Best of all for Espera were the occasions when her father came.

Everything about Leon – his attenuated figure, his close protective helmet and voluminous cloak, the deep pocks on his left cheek from some long past ice storm – everything bespoke activity. His grim face and flickering eyes disturbed her in an enlivening way that she yearned for in the depths of the winter season.

As she got older and strove for calm and equilibrium as her mother taught, she no longer jumped up and down when she saw him, but she could never keep her lips from stretching into a smile.

And like no other visitor, he disrupted her mother's routine. When he came, everything was overturned. Soledad meditated when she usually would have slept, talked to him when she usually would have meditated. She forgot to give glowworm to the yaegers, and they would wait in the passageway, large presences, five times the size of Espera, their sharp smell filling the air as their long, heavy bodies coiled over the floor and each other, patiently waiting to dip their eyes.

When he was visiting, Espera fell asleep to the sound of her parents’ voices, low and urgent, as if they had each, above all, to convince the other of something. Sometimes, as she fell asleep, she would open her eyes one last time on their faces near the box of glowworm, his with its deep penetrating pocks, her mother all large, light eyes. Then she would sink into sleep, hearing their discussion long after her body was at rest.

Her father’s voice accumulated its evidence, grouped ideas that led, inexorably, to one point: “We must win back the City Built of Starships and the ships if we are ever to make this lavender world ours.”

And her mother's voice, slower, deeper, repetitive and rhythmic: “The lavender world, the second world, is not ours. We are guests here.”

“Our mission!” cried Soledad loud enough that Espera was startled out of her near-sleep. “What mission? We were sent to this world so long ago that we have no idea what our mission was! Perhaps we were sent here simply because they ran out of room to live on the first world. We no longer know! We have lived here for three generations, and we have only made our lives and perhaps the lives of those who were here before us worse. The best we can do is live quietly, in harmony. With everyone, of whatever world’s lineage. That this is our mission.”

It was strange to Espera, born in this cavern, to think of the yaegers as anything but the companions of her life. She thought of their wings that could never be fully folded, of the bifurcated exoskeletal skull, the complex hemispheric eye, the bony hooks on their bellies that you could use to hitch a ride if the yaeger was willing

What are they for, she once asked her mother, are the yaegers for us to ride?

They are for themselves, her mother answered: it is not an edifying question.

And her mother said to her father, “The best we can do is to be quiet and cause no harm.”

“How many generations then until we have a right to belong here?” he said.

“Never,” she said. “Among the corrupt people on the coast, most already starve, a few live by the violence of starving the others. This will collapse of its own.”

“It will collapse sooner if we pull out the supports, their false religion and dependence on drugs.”

“You speak of the one forbidden thing.”

“And what is that, Soledad?”

“The one forbidden thing is violence.”

“No,” said Espera’s father. “The one forbidden thing is to fail in our mission.”

Praise for The City Built of Starships

Readers will love Espera—hero and adventurer…. Here’s a whole world that needs changing, and this girl has a part in it. Meredith Sue Willis knows how to write a rousing adventure story. I stayed up way past my bedtime—thank goodness I’m too old to have somebody telling me to go to bed.

After a cloistered, puritanical childhood, Espera ventures into a fallen world on a quest to redeem—or perhaps destroy—it.

A gripping tale. I love the way the ethical imagination is torqued into a surprising, nightmarish narrative.... It's a wonderful, dark, hope-giving book.

Marc Kaminsky — author of The Road from Hiroshima and Daily Bread

The City Built of Starships has been added to your shopping cart.