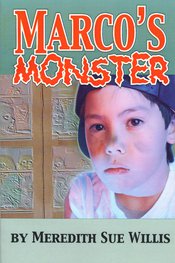 Marco and Tyrone are best friends. They do everything together in the tough city streets where they live: go to school, play baseball, even baby-sit Marco's little sister Ritzi. But sometimes it isn't easy being best friends, as Marco discovers when Tyrone gets the starring role in the fourth-grade play—the part that Marco wanted. Like a true best friend, Marco accepts Tyrone as the star, but then Marco has another problem: how to help Tyrone stay out of trouble long enough to star in the play. Then the situation deteriorates. Ritzi runs away, and it's up to Marco to find her. Can Marco help his friend and find his sister at the same time? This heartwarming sequel to The Secret Super Powers of Marco, full of action and adventure, will reaffirm the power of friendship.

Marco and the School Play

When I was small, I discovered I had special powers. I could fly until my mother threw away my little red cape, and last year, back when Tyrone was still a bully, I looked out my window and shrank him with my bare eyes. I never told him I did that, but he stopped being a bully, and now he's my best friend.

I don't use my special powers so much anymore. I still have Mental Sights sometimes where I see what is going to happen before it happens. But I need my powers less now that I have a best friend and my little dog Lucy. I used to be afraid around my block, but now I am never afraid, at least when Tyrone and Lucy are with me. Tyrone and I do lots of things like play baseball on the park team and work for my Uncle Albert in his store. This year Tyrone finally learned to read.  He almost never gets suspended from school. In fact, Tyrone got so good that I got mad at him.

It happened when we were working on the Monster play. Tyrone and I have Mr. Marshan this year. Mr. Marshan is a good teacher, but he gives lots of homework at night. This is to get us in shape for Fifth Grade and the Future. We get a lot of homework, but we also get to do a lot of fun things. For example, Mr. Marshan brought his camcorder into class for our special project. We could make our own videos! We had great ideas, but Lateesha and Miriam said they wanted our special project to be the Fourth Grade Play on the stage in the auditorium.

They boys all said "Videos! Videos! We want Videos!"

I think Mr. Marshan was on our side, but he called a class meeting, and we all sat on the rug. Personally, I think sitting on a rug for class meetings is something you should do with kindergarten children like my little sister Ritzi and not with fourth graders. But Mr. Marshan says Democracy Starts with a Level Playing Field. So we sit on the rug for meetings.

Tyrone and I call the rug the Rat-skin. The rug is so dirty the custodian won't even sweep it. It has little bits of crackers and fuzz stuck in it and one big smear of something yellowish orange. No one will sit on that. If you forget and sit there, Tyrone yells, "Guinea pig vomit! You sat in guinea pig vomit!"

That day the boys sat on one side of the guinea pig vomit and the girls on the other. Mr. Marshan sat down on the edge of the rug. He was wearing his Panda tie. Mr. Marshan buys funny ties to make the class laugh. He called on Lateesha first.

Lateesha said, "The girls want our special project to be a class play just like the Fourth Grade always does." The girls all clapped.

The boys shouted, "No, no, we want videos! Mr. Marshan promised videos!"

Mr. Marshan said, "Now on the rug, everyone gets his say. His or her say."

So Lateesha put her hand on her hip the way she does. "Well, this is still my say. And I say the Fourth Grade should do a fairy tale play."

"A fairy tale?" said Tyrone. "A fairy tale? Boo! Boo!" Tyrone is louder and older and bigger than anyone else in the fourth grade. He has a deeper voice to make his Boos, too.

All of us boys stuck together with Tyrone. We went thumbs down. "No fairy tales!" we said. "We want videos!"

Mr. Marshan stood up. Mr. Marshan likes Democracy, but he is also a Disciplinarian. He stood there with his arms crossed over the panda tie staring at us until it got completely quiet.

Robert raised his hand. "I'll do a fairy tale if we can do the Castle of Doctor Bluebeard and cut off the girls' heads!"

The girls all yelled, "Sexist! That is so Sexist!"

Lateesha said, "That is sexist and violent, Mr. Marshan." You could see in her eyes that she was planning on making Robert very sorry for saying that. She is almost as dangerous as Tyrone.

Mr. Marshan said, "I think we had better listen to each other politely, or there may not be a special project for this fourth grade at all."

"The girls want to do a modern fairy tale with singing and dancing," said Lateesha. "Like maybe Beauty and the Beast. But we're going to do it our way! In our play, the girl is very cool, and the beast will be a Monster with a whole posse of other Monsters. And the monsters will fight a lot."

I looked around at the other boys. They were all looking around at each other and me. We were all thinking it didn't sound so bad after all.

Then I had a Mental Sight. It was so real, it was like a Prediction of the Future. I saw myself on the stage with spotlights. The auditorium was dark and full of little kids. And they were all screaming and squealing in fear! They were having a wonderful time.

I didn't mean to go over to Lateesha's side so easily, but a name for the play just popped up in my brain like it was written there. I said, "We could call this play 'Cool Girl and the Main Monster.'"

"Okay," said Lateesha, like it was all settled. "You could call it that. Miriam's mother is going to sew costumes, and my father is going to make monster masks for all the monsters." The masks were going to have horns and dracula fangs, she told us. All of the monster posse would get monster masks, and the Main Monster would get a whole head. Well, right then, the war between the boys and girls was over. Everyone looked at Mr. Marshan and waited.

He rubbed his beard and pulled on his Panda tie. "Well," he said, "I guess we could find a way to use the camcorder too. We could make commercials for our play. We could also tape it, of course.  Maybe we'll use a couple of cameras, and then we could edit the best shots together--"

It was a pretty good example of Democracy after all, Mr. Marshan told us. Everyone was finding a way to get in what they wanted. Lateesha and Miriam would get to dance and lip-synch their favorite songs. The monsters would get to do scary fights.  We would still use the camcorder.  Mr. Marshan even had a special classic song from the Golden Oldie Days that went, "It was a Monster Mash, it was a Graveyard Smash!"

We all started walking around, boys and girls both, with our arms out like Frankenstein's monster.

One week later, he called another meeting and started to give out parts. Lateesha got Cool Girl, of course, and her best friend Miriam got to be her best friend in the play.

He named all of the boys who got to play monsters. Everyone was waiting to see who got the Main Monster. Mr. Marshan looked at his script and blew on his glasses. "Now," he said, "We need a Narrator. Marco will be the Narrator."

I felt like you do when you are running and you fall down when you least expect it.

"You're a good reader, Marco," said Mr. Marshan. "I can depend on you to shout if the microphone breaks, which it does about the half the time. The Narrator is a very important part."

I said, "But Mr. Marshan, I want to be the Main Monster."

"I'm not going to do the dance at the end with Marco!" said Lateesha. "Marco's too small to be the Main Monster."

Tyrone stood up and said, "I guess that means me, Mr. Marshan. I'm the biggest boy in the class. I'm the meanest too."

Robert laughed. "Yeah, Tyrone. You're a monster all right!"

Mr. Marshan looked at Tyrone and said, "I think Tyrone would made an excellent Main Monster."

"No way!" said Lateesha. "I'm not going to do the love dance at the end with Tyrone!"

"I'm not going to do it with her!" said Tyrone.

I was starting to feel like I was the most unlucky kid in the world. I said, "Give me a chance, Mr. Marshan! Sometimes the meanest monsters are the short ones!"

Lateesha said, "I'm not doing the love dance with Marco or Tyrone either. No way."

Mr. Marshan said, "Well, Lateesha, if you refuse to dance with any of the boys, then we'll have to get a Cool Girl who will."

"Look at me be a monster, Mr. Marshan!" Tyrone said. He jumped up on his chair and made his face all twisted and sort of dragged one arm down low. He looked scary even without a monster head. He stretched his big arm at Lateesha, but she just knocked it away. Then he started making monster noises at me. I just stared at him.

Mr. Marshan had decided. Tyrone was going to be the Main Monster. Robert and some other boys were going to wear masks and do the Monster Mash dance. I had to be the stupid Narrator. I sat there thinking, This is what you get for being a good reader? You have to stand on the side of the stage and wear a tie and a sports jacket while your friends get to play monsters?

I might have finished being mad sooner, but all afternoon Tyrone kept making the monster face and growling.  "I'm the Main Monster," he would say, like we were going to forget!

I finally said, "You know you won't stay the Main Monster, Tyrone. You know you'll get thrown out of the play for bad behavior."

His eyebrows went real low over his eyes and his lips stuck out, but I didn't care. I never was so mad in my life before. I was mad at Mr. Marshan and Tyrone and Lateesha and everyone I knew

After school, Tyrone and I always go pick up my sister. But that day, I didn't wait for him. I grabbed Ritzi by the arm and made her run. I never looked back, not even when I heard Tyrone calling my name.

There is a great deal of action in this short novel, and several themes that Willis neatly pulls together in the conclusion. . . . Ebullient characters, a fast-moving plot, and a realistic setting all contribute to Willis's lively, sometimes poignant story.

This quick, easy read is full of humor and angst, and features a strong single-parent family, a theater experience, and lots of adventure

Marco's Monster has been added to your shopping cart.