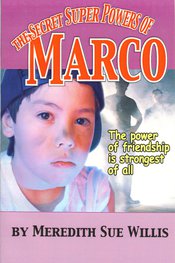 The Secret Super Powers of Marco by Meredith Sue Willis

Marco knows he has Special Powers. He has held this belief ever since he fell out of a window when he was three years old. People said he fell, but Marco knows what really happened: he flew. But Special Powers can't help Marco make friends at his new school, and when a bully named Tyrone joins the class, Marco's trouble is just beginning. Instead of using his Special Powers on Tyrone, Marco comes up with a better solution—one that provides plenty of adventure, including a daring rescue, a valiant chase, a puzzling mystery, and, most of all, good times. Meredith Sue Willis's warm and funny story about an unlikely friendship proves that the strongest powers of all exist between family and friends.

When I was about three years old I had a little red cape I wore every day.  My mother says I was so cute, she used to keep a picture of me in the album in this cape with my arms stretched out like Superman.  We lived in a different apartment then, on the fourth floor, and Mommi says it was hot in there even in the winter.

One nice sunny day, she opened up the window to cool us off, and Mommi says she turned around to do something with the baby, and when she turned back again, I wasn't there anymore.  She says I climbed right over the iron bars and jumped out the window.

My mother started to scream, but she says some people already found me down on the street on top of a big cardboard refrigerator box, and I was still alive.

I was still alive, and I was not even hurt.  My Mommi says she went crazy.  This was before she got her diploma and got a good job.  She says she just went crazy and handed over the baby to somebody else and tore up my cape, and she tore up the picture album to get rid of that picture of me in the cape.

It was in all the newspapers about how I fell out the window and nothing was broken.  Mommi says the newspapers wrote "fell," but she thinks I jumped.

But I say I did not fall and I did not jump.  I say I didn't get hurt, because I could fly with that cape.  I could fly out windows to wherever my eyes went: to the tops of roofs, to the clouds.  I think I just flew down nice and easy to that refrigerator box.

But that was when I was only three years old.  After Mommi tore up my cape, I couldn't fly anymore.

Praise for The Secret Super Powers of Marco

The characters are strong and likable; the setting is believable; and the story is both exciting and thoughtful. Willis gives her readers a sense that each person has 'super powers,' but she never resorts to simplistic solutions for complex problems.

In this appealing novel, narrated by the title character, we're never quite sure where Marco's superpowers end and his imagination begins. . . . Marco's earnest voice convinces us that it doesn't matter if his superpowers are real or not—it's really the powers of friendship, trust, and imagination that count.

A promising debut with this tale of a clever young peacemaker in a rough neighborhood.

The Secret Super Powers of Marco has been added to your shopping cart.