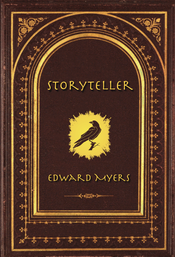 First published by Clarion Books as a hardcover, this acclaimed children’s fantasy novel tells the tale of Jack Storyteller. Farm boy Jack has always hoped that life is more than just planting and harvesting. As he sets off to seek his fortune, Storyteller relates his many adventures and narrow escapes. Jack’s stories—and those of the people he meets—interweave to create a brilliant tapestry. In addition, the novel also tells the stories of the colorful characters Jack meets along the way, among them a talking bird, a one-eyed robber, a melancholy princess, and a mysterious illusionist. All of these tales, along with a frame story, will capture and entrance the reader's imagination. Edward Myers’s Storyteller explores the power (both for good and for evil) of the stories in our lives.

Sitting close together in rough-hewn wooden chairs, an old man and his grandchild watch the embers glow, listen to the rain tap at the windows, and find solace in this warm, dry place and in each other’s company. Breakfast dishes clutter a nearby table. A kettle of cider hangs from a hook over the fire, where it simmers almost inaudibly. A shiny black bird dozes on a perch not far from the replace. An old woman, seated at a large loom near the back wall, weaves cloth and sings softly to herself.

“A perfect morning for a story,” says the old man. “Don’t you agree?”

There’s a brief, not altogether comfortable pause, as if they should discuss the matter but neglect to do so. Then the old man begins: “Once upon a time—”

“I beg your pardon?” The old man isn’t offended so much as puzzled.

“I’m tired of stories starting that way,” the child explains. “Can’t you start some other way?”

“Yes, of course,” says the grandfather. “I know many ways to start a story. How about this: Once, long ago—”

“Very well, then.” He pauses and starts over. “Once, long ago, a magic frog—”

“Pardon me?” asks the old man.

“I’d rather not hear a story about a magic frog.”

“No? You’ve always liked them in the past.”

“Today I’d like a different kind of story—one I’ve never heard before.”

“All right,” the old man responds. “How about a story in which a witch—”

“No dragons, either. I’m really sick of dragons.” Now the old man grows perplexed. “No magic frogs, no witches, no dragons. Well, I have to admit that rather complicates my task.” He sighs and falls silent for a moment. At last he says, “I’m afraid you’ve ruled out most of the stories I can tell you.”

“Don’t you know any others?”

“I know a thousand stories, maybe more, but none seems likely to please you. You’ve stopped me from telling every story I’ve started. Is it possible that you won’t like any of them? Is it even possible that you consider yourself too old for my stories?”

“No, I like your stories,” the grandchild states firmly, “but I want one that’s—that’s new.”

“Ah, one that’s new. I see. That clarifies the situation. All right, how about this one: a story about a storyteller.”

“Well, I’ve never told it to you—or to anyone else, for that matter—so in that sense it’s new. And it’s a story that’s close to my heart. Closer than you can imagine.”

Long ago—but not so long as you might imagine—a storyteller earned his bread by telling stories. He told stories to farmers and villagers; to children and grownups; to beggars, traders, sailors, and warriors; to kings and queens. The storyteller told his stories. The people listened. And for the gift of amusing them, the people paid him—with eggs or apples if they were poor, with a candle or a pair of wool mittens if they were better off, with gold or jewels if they were rich. By this means the storyteller made his way through life and through the world.

Yet the payments he gained weren’t the sole reason for his telling stories. The storyteller did more than just ply his wares—as if words were simply goods to sell! No, he told his stories for the love of storytelling. Just as a weaver delights in the click and clack of the shuttle shooting back and forth across the loom and thrills at the sight of the tapestry growing long and wide before him, so too did this storyteller enjoy weaving the tales he told. The storyteller loved telling stories, and the people loved hearing them.

But I’m getting ahead of myself. The storyteller did everything I’ve told you, but not during his early years. Like anyone else, he went through a long apprenticeship before practicing his trade. He had to learn the stories, how to shape them, how to tell them. He had to learn how to please his listeners—when to amuse them, when to surprise them, when to frighten or perplex them. So, like any other story, the story of this storyteller must begin at the beginning, and that’s where I’ll start.

His name was Jack. That’s an ordinary name, one that fit him well, for Jack was indeed an ordinary boy. He grew up in an ordinary family and lived in an ordinary village, Yorrow by name, in the Realm of Sundar. There Jack did what countless children had done for as long as anyone could remember: he helped his parents run their farm, he played during the brief times when he wasn’t working, he collapsed in exhaustion each night, and he awoke the next day ready to start all over again.

In appearance, too, he was ordinary. He stood about the same height as most boys his age. His facial features were pleasant without seeming handsome. A thatch of brown hair roofed his head. His eyes were brown as well. Indeed, Jack looked much like any other country boy in Sundar.

He behaved well and worked hard to help his family. He had to. Life was difficult throughout the Realm, and dangerous. Every family provided for its own needs, since failing to do so meant hardship, hunger, even starvation. Not only the adults but all the children, too, labored to plow the soil, plant the crops, herd the goats, feed the hens, gather the eggs, weed the garden, carry the water, mow the hay, harvest the crops, shear the sheep, spin the wool, weave the cloth, sew the clothes, and do whatever else needed to be done. Jack did his part, just like everyone else.

Yet something about him wasn’t ordinary: his stories. For even during his earliest years, when Jack had just barely begun to talk, he told stories.

What kind of stories, you ask?

Well, you can’t expect much from a child who’s barely old enough to say his own name. But I’ll tell you this much: Jack’s first full spoken phrase was “Once upon a time . . .”

The truth, however, is that even Jack’s kind, loving parents had little use for his stories. All that mattered was surviving the latest hardships. A storytelling boy was a luxury that no one viewed with patience, much less delight. Yet as he grew older, Jack couldn’t ignore his own stories. They came to him unbidden. They whispered to him in the night. They accumulated in his head. They crowded out his other thoughts. Jack’s mind became a hive buzzing with stories.

“Once upon a time,” seven-year-old Jack told his sister Gwynne as she lay ill one autumn, “a girl named Gwynne caught a quail in a trap she’d set. But the quail cried out, ‘Please! Set me free and I’ll protect you for the rest of your days. You’ll never be sick, for my magic feathers will heal you.’ And the quail plucked a feather from his wing and gave it to Gwynne.”

“Once upon a time,” eight-year-old Jack told his brother Alfred, when Alfred fell into the well and floated, cold and frightened, far below in the water while Gwynne ran off to get help—“Once upon a time, Alfred fell into a well and waited for someone to come and pull him out. And while he was down there, Alfred heard a voice say, ‘You! What are you doing in my well?’ Terrified, Alfred stammered, ‘W-w-who’s there?’ ‘I am,’ said the voice. ‘I am Samantha, the water sprite who lives in this well.’ ‘Are you a good sprite?’ Alfred asked nervously. ‘Or an evil one?’ Samantha replied, ‘Oh, very good, and I’m here to help you. I’ll teach you a song that will keep you warm until your rescuers arrive.’”

“Once upon a time,” nine-year-old Jack told Father following Grandmother Hilda’s death, “a woman named Hilda got sick, died, and left her son, Edmund, lonely and sad. So after the burial Edmund planted an oak tree over Hilda’s grave. And the roots grew downward and hugged Hilda. And the tree pulled Hilda into itself and grew big and strong, so that Hilda was the tree and the tree was Hilda, with great limbs reaching outward toward everyone and everything. And Edmund often climbed the tree and rested among the branches, and in that way he never lacked for an embrace.”

Where did these stories come from? Jack didn’t know. What did they accomplish? He didn’t know that, either. By the time he was ten years old, he had only just begun to explore his storytelling skill; he didn’t understand it yet. All he knew was that the stories welled up from somewhere deep within, and they demanded his attention until he released them into the world

The cast of magnificently varied and multidimensional characters includes a viciously greedy king, an evil illusionist, a princess who feels trapped by her royal position and a brilliant, talking bird who is hopelessly in love with a fish. The stories Jack tells along the way . . . act as clever devices that provide insight into the nature of power, love, good and evil. Myers . . . also deftly and subtly explores and illuminates the writer’s craft and the very basis of story and the power of storytelling. Marvelous.

Characters are colorful and memorable.

[This] story has the timeless appeal of adventure, humor, and light romance, all woven together by an able teller of tales.

Storyteller has been added to your shopping cart.